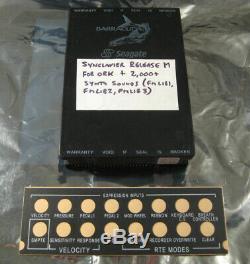 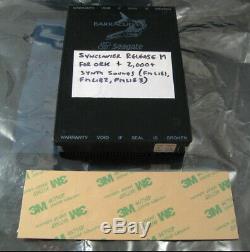 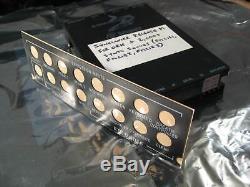 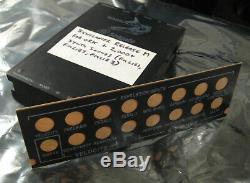 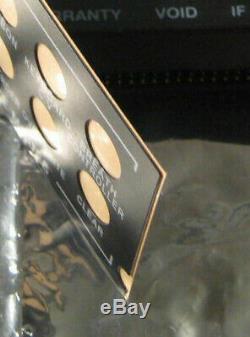 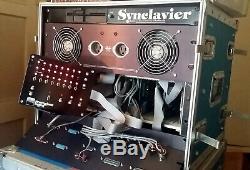 2 The polycarbonate overlay very high quality plastic sticker with industrial peel and stick adhesive on the back, look at the side angle photo to see how thick this high quality material is, this is the same materials and factory work as the famous Synhouse synthesizer and drum machine overlays for the E-mu SP-12, SP12 Turbo, SP-1200, Emulator II, Moog Source, etc. Which renames 16 of the existing buttons for the new MIDI and velocity functions that was introduced with Release L for the Original Keyboard, which allowed ORK systems to have MIDI for the first time (so long as it had a LOT of retrofitted upgrade hardware in there). In order to use this as the main or sole bootable hard drive, this is for someone with a Synclavier II that has been retrofitted with lots of newer hardware for SCSI, MIDI, etc. It won't work with a factory stock Synclavier II that only has the floppy drive or floppy plus the oldest IMI MFM hard drive interface, it must have the 1985-on SCSI interface (not IMI). But actually, if you want to use it just for sounds, if you have a Synclavier II with all that stuff plus the V/PK keyboard, or a Synclavier poly system (with or without V/PK keyboard), you can boot from another drive and set this one as a second auxiliary hard drive for sounds only, you just won't be able to boot from this one because it's the wrong software for your keyboard/poly voices.

Synclavier software from the 80s and early 90s was very system/hardware specific, there were at least several versions of each Release. Most importantly, these are synthesizer sounds, not samples, so you must have the Synclavier II synthesizer voices to hear these sounds. This is not for other samplers Akai, Kurzweil, Roland, etc. Perfect condition, tested and working perfectly.

This is a bootable modern (relatively modern, for 50-pin SCSI drives, that is) 3.5" Synclavier SCSI Winchester drive that is loaded with approximately 2,000 Synclavier II ("FM) synthesizer sounds and software. This means that, regardless of what connectors you have on the inside of the panel, outside, or 34-36-50-pin adapters it may be going through, this is just to be connected directly to the Synclavier D24 or D24/50 SCSI card and will not need any jumper changes or terminator put on it.

, but it also allowed the never-velocity ORK keyboard to receive MIDI velocity input with a lot of control and performance controller functions, it supported real-time clock commands and program changes. To clarify, the Synclavier could transmit program changes, but did not respond to program changes due to the expansive nature of the system. The Synclavier only recorded them to the Memory Recorder and retransmitted them to provide studio control or live show control for other, simpler MIDI devices that could make use of the mere 128 selections in the MIDI specification. The Music Notation Display was borrowed from the Music Printing option (still available separately) and added to the standard software, showing up to eight tracks of the Memory Recorder on eight different staves and notes could be added, deleted, or changed on this page with changes taking place instantaneously in the Memory Recorder. One of these note editing capabilities was allowing the user to add precise rhythmic justification (autocorrection) after the fact to individual notes of keyboard performances previously recorded in the Memory Recorder, using the onscreen Music Notation Display.

The Timbre Displays were much improved with five separate displays, three that display timbres graphically and two that list information about the keyboard timbre in numeric form. The Graphic Display showed the harmonic structure and the volume and harmonic envelopes of all four partial timbres of the keyboard timbre.

They did a really good job on the special. It included a button panel overlay to replace the lower half of the third button panel and rename those functions. This is interesting; the old HARMONIC ENVELOPE ATTACK button became the MIDI button, meaning that the ORK from the Synclavier II system (which never had MIDI) became the first NED keyboard to actually have a MIDI button that said "MIDI" on it. The V/PK used one of the blank, initially unassigned buttons as a MIDI button when MIDI was introduced in 1985, but didn't have MIDI printed on it until several years later. The new ORK overlay had buttons for VELOCITY, PRESSURE, MOD WHEEL, BREATH CONTROLLER, VELOCITY SENSITIVITY and RESPONSE, all things that the ORK/Synclavier II didn't have, but were cleverly implemented in MIDI.

The buttons allowed the Synclavier II to act as a MIDI slave with full velocity and pressure sensitivity, adjustable velocity dynamic range, and to receive mod wheel, pitch wheel, breath controller, and other MIDI controllers. Most interesting, it allowed a forced MIDI velocity; by pressing the VELOCITY RESPONSE button, the actual velocity being transmitted by the non-velocity ORK keys could be set in real time to output a specific number by dialing up the number with the data wheel and seeing the number on the LED readout. This hard drive is loaded with excellent quality sounds. These aren't so much the imitative flute, glockenspiel, tuba, etc. That came in the NED factory disks, these are more synthy sounds in the tastes of the 90s (a lot of killer sounds, one of them can be heard in a video on the Synclav com YouTube channel).

The sounds here are all synthesizer sounds. The photos show screenshots so you can see some of the contents.

One shows the top level Winchester catalog, which, most importantly, has the. SYSTEM subcatalog, and three catalogs of synth libraries, FMLIB1, FMLIB2, and FMLIB3. The next three screenshots show you the three FMLIB1-2-3 library subcatalogs opened up. Each one of those has additional subcatalogs inside it, FMLIB1 has 20, FMLIB2 has 19, and FMLIB3 has 25, for a total of 64. Inside each one of those is a bank of 64 custom synth sounds (8 banks of 8 sounds).

With the NED XPL file system, synth sounds existed only in a file named. Sounds crazy, but that is how it was, not. Since two files can't be in the same place on any computer with the same name, each one has to be tucked away in its own subcatalog (like a folder on a PC).

To access those sounds, you just navigate from the top level directory (W0:) to the library you want, like FMLIB2 then enter FMVOCAL, and those 64 appear on your A Timbre Directory page, or on the 8 x 8 keyboard button banks if you want to select from there. However, although there are 64 banks of 64 sounds each and that would multiply out to over 4,000 sounds, there aren't really that many because many times the higher number sounds entries are blank, sometimes because they are Resynthesis sounds that take more memory, or at least that's how it was with the Synclavier II, and the sounds here are all synthesizer sounds.

This drive is in excellent condition, configured to work as a main bootable system drive, and is terminated. I checked it out myself and took the screenshot photos.

None whatsoever, this works perfectly. As you can see in the photos, it is touching only proper anti-static packaging and nothing else. Not carpet, not plastic table tops, not sandwich bags. There is NO remaining way to send items like this overseas for less, sorry.

I accidentally undercharged on several items recently. Please see my other listings for other rare NED software, sounds, and manuals that I may have for sale at the moment. The item "Synclavier SCSI Hard Drive withOS + Huge SynthSound Library Sync2 ORK MIDI Overlay" is in sale since Thursday, May 7, 2020. This item is in the category "Musical Instruments & Gear\Pro Audio Equipment\Synthesizers". The seller is "synhouse" and is located in Los Angeles, California.

This item can be shipped worldwide.